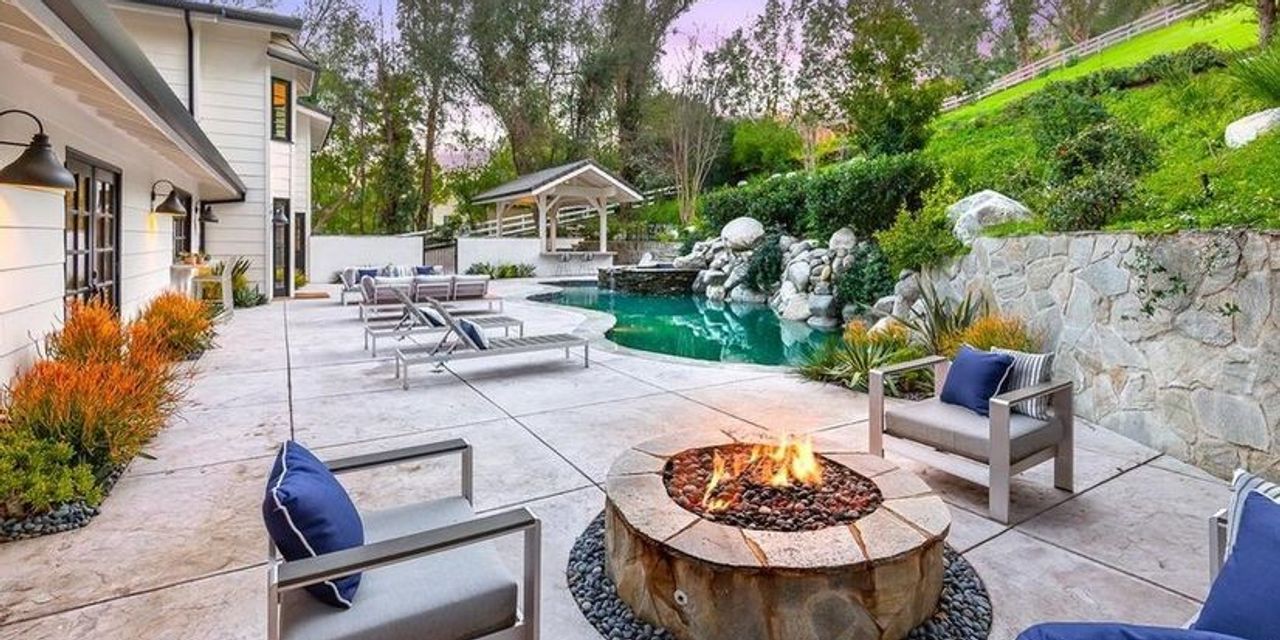 It’s a real estate party in the USA for Miley Cyrus. The “Bangerz” singer banged out a quick sale of her mansion in Hidden Hills, CA, less than a year after she bought it, Dirt reported.

The star purchased the six-bedroom abode for just under $5 million in June 2020, property records show. Then, in an off-market deal, the chart-topping musician handed it off to a buyer for $7.22 million.

The area has long been a hot spot for celebrities craving privacy; it’s the home of Drake and multiple Kardashian family members.

At the time Cyrus bought it, a year ago, the interior photos showed a neutral palette of white walls and light wood floors, but the rocker engaged her designer mother and manager, Tish Cyrus, with her design partner, Mat Sanders, to give the space a bit of Miley flair.

Tish Cyrus described the vibrant, maximalist effect to Architectural Digest, in a recent profile of the transformation, along with quite an eye-popping photo spread.

“With Miley, it’s got to feel rock and roll,” she said. “There’s a lot of color. Technicolor.”

Before Miley got her hands on it, the space was fully remodeled in 2018, with an updated kitchen and an adjacent family room that has an eye-catching mercury glass bar and a wine fridge, which opens out to the patio.

The six-bedroom, six-bathroom, 6,394-square-foot space now features dark-toned paint on the walls, relieved by a rainbow palette of plush furniture, as well as artworks and decor, the photos in Architectural Digest show. Alas, the photos available here are pre-Miley reinvention.

After the renovation, wallpaper dotted with tiger heads covers a powder room. Despite the dizzying patterns and bright shades in most of the home, the gym and pool area remain neutral-toned, serene spaces.

The dining room now features a new light fixture and blue-gray walls. The light fixtures were also changed in the kitchen, which comes with a large center island, Wolf and Sub-Zero appliances, and a white tile backsplash from the previous remodel.

The musician also added a recording studio with her own colorful stamp. Her glam room features leopard print walls and a violet carpet.

Up a floating staircase, the master bedroom carries on the drama of dark walls. The en suite features a fireplace, private balcony, walk-in closet, and an en suite marble bathroom with dual sinks and a separate vanity.

On the 1.1-acre grounds, the design includes a grotto-style pool and spa, a fire pit, outdoor dining, and built-in barbecue. The undeveloped hillside affords opportunities for adding a guesthouse or barn.

The fun and high-end design must have caught the buyer’s eye, since the final price was well over $2 million more than what Cyrus paid just a year ago. Perhaps the pop star and her mother plan to embark on more projects together.

As we’ve documented in the past, Cyrus, 28, has owned an impressive number of homes. She appears to have narrowed down her current holdings to a 33-acre ranch in Nashville and a place in Studio City, CA. She picked up the midcentury modern abode in 2011 for $3.9 million. The remodeled layout features over 5,100 square feet, floor-to-ceiling windows, and a backyard with a pool, cabana, and grill.

She may have decided to let the Hidden Hills place go because she is back on tour, following up her July 4 appearance in Las Vegas with shows at Lollapalooza in Chicago and the BottleRock Festival in Napa, CA.

This story was originally published on Realtor.com.