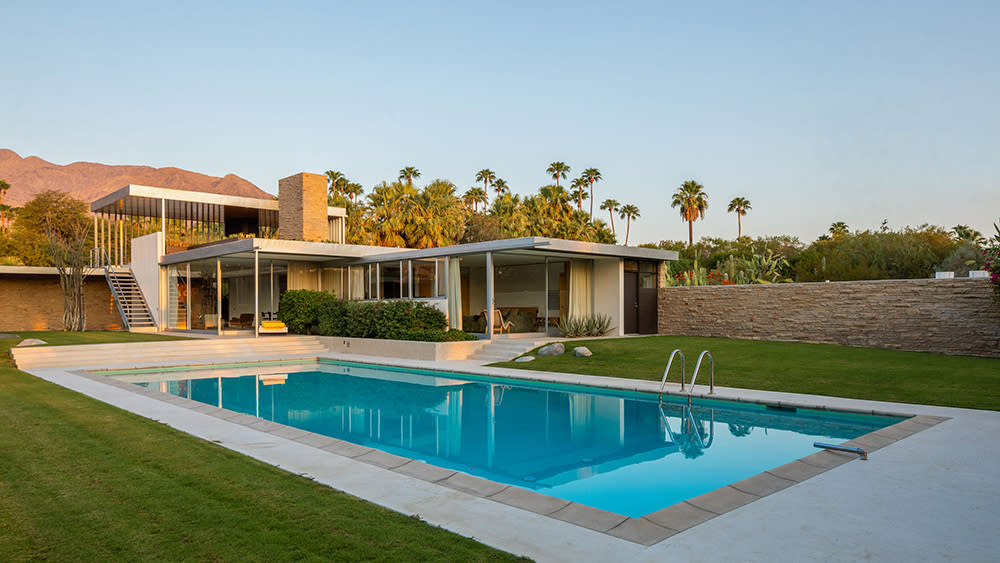 Built back in 1946 for the Pittsburgh department store magnate Edgar J. Kaufmann Snr., this sleek, rectilinear, flat-roofed two-story abode, made famous by that classic 1970 Slim Aarons photograph “Poolside Gossip,” is considered to be one of the most architecturally significant homes of the 20th century.

Now, 13 years after it last hit the market, the house is looking for a new custodian. After being listed for a rather optimistic $25 million last October, the price dropped to $19.75 million in April. With no takers, it has just be re-listed for $16.95 million.

“In many ways, this is more like a fabulous art museum than a regular residence, and hence will appeal to a unique buyer,” listing broker Gerard Bisignano, of Vista Sotheby’s International Realty tells Robb Report.

Once owned by the late Eugene Klein, former owner of the San Diego Chargers, and then “Mandy” crooner Barry Manilow, it’s currently home to Brent R. Harris, managing director at Newport Beach, California-based Pacific Investment Management. He purchased the house, for $1.5 million, back in 1993 with his then-wife and architectural historian, Beth Harris.

Credit goes to the Harrises for undertaking a massive, five-year, labor-of-love restoration of the house to bring it back to its original, authentic mid-century modern splendor.

“I think more than 300 magazine articles have been written about this truly remarkable restoration. It set the gold standard for the renovation of a landmark property like this,” explains Bisignano.

Carried out by Los Angeles-based restoration experts Marmol Redziner + Associates, their painstaking pursuit of originality included convincing a Utah quarry to re-open a section closed down in the 1940s, to provide sandstone in the exact pinkish hue to replace sections that had been damaged.

And to give the open look and feel of the home’s bolder-strewn grounds back in 1947, the Harrises bought several adjoining lots to more than double the size of the homesite to 2.18 acres.

Today this landmark home covers 3,200 square-feet and features five bedrooms and six bathrooms, a tennis court on an adjoining lot and a poolhouse with opening walls of glass with views of that iconic swimming pool.

“Legend has it that Mr. Neutra had the pool built first so he could stand in it to cool off while directing construction during the hot Palm Springs summers,” Sotheby’s Bisignano explains.

A unique feature of the house is its second-floor, open-air covered patio—designed by Neutra as a way of getting around strict local building regulations that, at the time, restricted home construction to a single level.

Gates off West Vista Chino road in Palm Springs’ Chino Canyon neighborhood, lead into a small motor court. A path takes you past the new pool house, built during the ’90s renovation, and opens onto that famous swimming pool.

“It’s at this point during a home tour that I pull out the Slim Aarons “Poolside Gossip” photo. The view hasn’t really changed in over 70 years. And each time, any potential buyer will go ‘Ahhh, yes.’ It’s the defining view of the house,” says Bisignano.

Inside the home, the main floor layout is centered around a living and dining room with its floor-to-ceiling windows and brick-fronted fireplace. The master suite, additional bedrooms and service wing are along adjoining corridors or covered walkways.

Mr. Bisignano says that after 28 years of ownership, his client feels it time to pass on the home to another lover of architecture.

“We’ve had amazing interest from a number of very well-known celebrities and entrepreneurs. But it is a unique asset that will take a unique buyer who appreciates its history. It really is one of the world’s most important treasures of modernism.”

If it sells for close to its current asking price, it will be the most expensive sale in Palm Springs history. The current record is held by the John Lautner-designed compound owned by the late comedian, Bob Hope that sold for $13 million in 2016 to billionaire investor Ron Burkle.

See more photos of the home below: