The S&P 500 index may have had the worst first half of a year since 1970, but several retailers did even worse. Many retailers received extraordinary boosts in their businesses from the pandemic, so it’s not surprising to see backtracking from some of those upward stock moves.

Names like Target (TGT 2.05%), Home Depot (HD 0.82%), and Walgreens Boots Alliance (WBA 0.83%) may be in the same sector, but they have very different types of businesses. They each benefited from pandemic trends in different ways, but they all had one thing in common in the first half of 2022. The S&P 500 dropped nearly 21% over that time, but Target nearly doubled that, dropping 39%. Home Depot and Walgreens also lost to the index, down 33.9% and 27.3%, respectively, according to data provided by S&P Global Market Intelligence.

It wasn’t just a shift in consumer trends that caused the outsize stock drops. It became more of a long-term problem for Target. In addition to changing consumer needs, the company was caught with excess inventory partly due to its efforts to navigate supply chain disruptions by stocking up.

Now that it has too much inventory of the wrong products, it has to unwind that problem. That will hit profitability as it spends several months discounting some of its products. In early June, the company communicated its plan to optimize its inventory to investors. Management expects product promotions to drop its operating margin rate to just 2% in its current quarter, the fiscal second quarter. That’s compared to an already disappointing 5.3% in the prior quarter and 9.8% in the year-ago period.

Home Depot and Walgreens stocks have declined for different reasons from Target. Home Depot expects revenue and earnings to continue to grow this year. And profitability hasn’t yet been affected by rising raw material costs or a drop in demand. But some investors see the macroeconomic environment bringing change soon.

Rising interest rates have already begun to slow the housing market, and investors have knocked down Home Depot by association. While the company has prioritized growing its business with contractors and professionals, it still has a strong consumer business that can prosper in any housing market. After all, if new home purchases slow, many homeowners will spend to maintain existing homes.

Walgreens benefited from COVID vaccinations as consumers were brought into its retail pharmacy stores. Declining demand for vaccinations and home test kits have contributed to a 74% year-over-year earnings per share (EPS) drop in its fiscal third quarter. Even discounting a one-time opioid settlement payment, EPS dropped 30% versus the prior-year period.

But the shares of these three companies reflect the recent news, resulting in much better valuations based on price-to-earnings ratios. 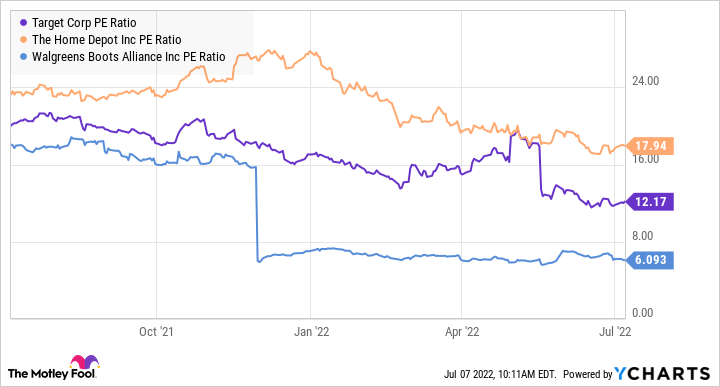 That makes now a good time for investors to research whether these businesses fit into their portfolios. Short-term problems can create the best times for investors with longer time horizons to significantly boost returns.