Star Wars is renowned for many things—creating the summer blockbuster, revolutionizing special effects, giving the world Baby Yoda—but one aspect of the franchise that gets overlooked is its fashion. While the impact of the series on the runway is well documented, its sartorial appeal extends beyond the collections. Even without the now famous Rodarte fall/winter 2014 tribute dresses covered in Luke Skywalker screen prints or the spring/summer 2016 Vetements skirts decked out in The Phantom Menace’s poster, the films are a source of outfit inspiration. The characters that exist in the galaxy far, far away dress for extreme situations, but their functional style corresponds to real life.

The women of Star Wars are the franchise’s real fashion stars—though there are male clotheshorses, such as cape enthusiast Lando Calrissian. The costumes created by John Mollo, Aggie Guerard Rodgers, Trisha Biggar, and Michael Kaplan for the original, prequel, and sequel trilogies, respectively, now reside in museums, but many of the designs are utilitarian. Queen Amidala’s ornate royal robes and Leia’s metal bikini are exceptions. Still, most of the clothes in Star Wars have to allow characters to fend off their enemies without being constrained. Comfort is key—especially when your life could depend on it.

It may feel odd to apply logic for dressing for a lightsaber fight to your work-from-home wardrobe, but it also prioritizes function and comfort. Sure, you’re probably not going to be trekking through the forests of Endor anytime soon, but Princess Leia’s splashy camouflage-meets-tie-dye poncho would be ideal for gardening in your backyard. Likewise, Rey’s closet full of light, layered knits and cropped tights screams loungewear, even if you aren’t socially distancing yourself from a shirtless Adam Driver.

After lounging around the house in the same sweatpants since mid-March, it may be time for a change, a touch of fantasy and magic to make the days brighter. On May the Fourth, everyone can be an honorary Jedi, Stormtrooper, or whatever else suits their fancy, so they might as well dress the part.

Save the ubiquitous sheer white dress and side buns for Halloween. Instead, draw inspiration from Leia’s Return of the Jedi forest outfits and their lush color palette. If you want to feel like a princess, Dries Van Noten’s glossy poncho and Marcia’s cosmic tie-dye should do the trick.

Over three films, Rey’s journey from a scavenger to a skilled Force user takes her many places, but her simple belted pleats remain consistent. The ease of wear is echoed in Theory’s oversized wool poncho and Loewe’s leather-trimmed waist belt.

Gwendoline Christie, the actor behind the metal-clad baddie Captain Phasma, is one of the best-dressed women in the world, so it makes sense that her Star Wars alter ego would be as chic. In the reflective splendor of Stand Studio’s silver jumpsuit and Proenza Schouler’s Birkenstocks, you’re sure to feel a little of that dark-side energy.

The stay-at-home mandate doesn’t mean giving up everything you love about the outdoors. A walk through the park—be sure to wear your mask—is a perfect excuse to break out a beautiful cotton dress from Preen in the vein of Padmé Amidala. Queen, senator, and Star Wars’s most opulent dresser, she might even dip into one of Pat McGrath’s Mothership palettes if the occasion is special enough. 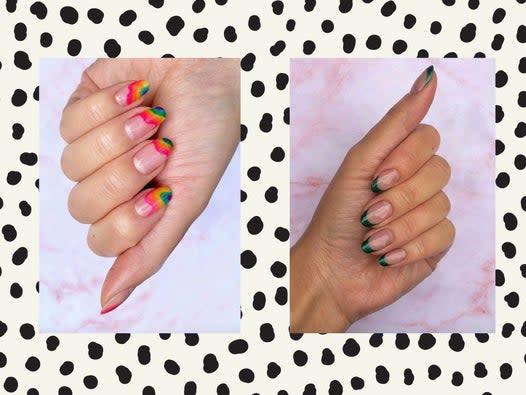