Correcting the Record: The Women Who Changed Architecture

This article was originally published on Common Edge.

There’s a famous quote—it’s usually attributed to Winston Churchill—that goes, “History is written by the victors.” This cynical and largely erroneous belief could only be true if history was fixed, settled, static. It never is, and that’s precisely why we have historians. It might be more accurately said that history’s first draft is written by the victors. But first drafts, as any writer will tell you, are famously unreliable. So it is with architectural history. Women have played significant roles in the field since the start of the profession, but that is not how history has recorded it. A new book, The Women Who Changed Architecture (Princeton Architectural Press), a collection of more than 100 mini-biographies of important women architects, covering more than a century, hopes to take a step toward correcting that oversight. Recently, I spoke to Jan Cigliano Hartman, the editor of the volume, about creating the book, important and overlooked figures, and why this isn’t a definitive list.

International Women’s Day 2022: On Rebalancing Forces and Adjusting the Narratives

MCP: Let’s start with the origin story of the book. How did it happen?

JCH: In 2018, I was a senior editor at Princeton Architectural Press, and my job was to either create projects or bring them in. One day I began Googling general architectural subjects: “Architects Under 40”; “Architects Over 80”; “Architects top award winners.” I immediately realized that 95% or more of the names that came up were men. This wasn’t news. I studied architectural history in the 1970s, and even then I was alert to the imbalance in the printed knowledge about women and men designers. My growing discovery that women in architecture were underrepresented in publication and also online led me to develop this collective biography of women who changed architecture. I started with 50, and then we (PAP) raised it to 100, and then I thought: I’m not putting an arbitrary cap on this. The book is now a collected biography of 122.

MCP: How did you make your choices? How did that process work?

JCH: We wanted women who were influential in the field of architecture and had a strong body of design work. Those were the two principal criteria. There are a couple of exceptions to that, such as Susana Torre, who created the Women in Architecture exhibit and book for the Architectural League in 1977.

I did most of the selection. I’m a historian by training and did a lot of research. We knew we wanted it worldwide, not just North America. Through a lot of research and a number of suggestions from colleagues, we amassed a list. The truth is, I know there are architects who are not in the book who will hopefully be included in a second edition, if that happens.

MCP: I was looking through the book, and—if you’re inclined toward optimism—it is to some extent a history of progress. Despite the fact that women still struggle with representation in the field, it has gotten better, and there are leaders and prominent women architects in significantly larger numbers. And there are seminal figures from the past who have been rediscovered and in some cases posthumously applauded. But then there are the important figures who’ve been buried by history. How did you discover those women?

JCH: The one that I think about most is Ethel Bailey Furman, an African American architect who designed more than 200 buildings in Richmond, Virginia. She’s acknowledged as both the first woman architect in Virginia and the first Black woman architect in the U.S. She is largely unknown and certainly underrepresented in local, regional, state, and national archives. Most of her residential buildings are gone, the victim of urban renewal that demolished hundreds of Black neighborhoods across the country.

MCP: When did she practice?

JCH: In the early 20th century.

MCP: So more or less the same timeline as Julia Morgan? Or a little bit after?

JCH: Furman is about 20 years younger than Morgan. Ethel was born in 1893 and died in 1976. Her dad was a builder. That’s how she got into architecture. She went to the Negro Contractors Conference in Hampton Institute in 1928, and she was the only woman in the entire group. I found her at the International Women in Architecture archive at Virginia Tech.

MCP: Had you heard about her before, or was this a eureka moment where you said, “Who’s this?”

MCP: Was she published in any traditional sense?

JCH: I believe she was, but probably in local newspapers.

MCP: Interesting. Who are some of the other women we might not know about?

JCH: You might know Anne Tyng, the unmarried companion of Louis Kahn, but you may not know that she was a design partner with Kahn. She designed the interior of Yale University Art Gallery and design center, which is regarded as his first significant commission and breakthrough masterpiece. Anne designed the interior of one of the major galleries in the building. And earlier in the 20th century, there were many female associates in the Frank Lloyd Wright studio. He was one of very few men of his era who hired women in his design studio.

There’s two important women that I’d like to highlight for you. One is Norma Merrick Sklarek, who was born in Harlem in 1926 and educated at Barnard and Columbia. She worked for Gruen Associates and she designed some major buildings, including the U.S. embassy in Tokyo and Pacific Design Center in Los Angeles. She’s African American and was completely unknown to me. Another important designer is Natalie Griffin de Blois, who was a senior designer with SOM. She was behind the scenes, designing these major New York landmarks that we know as “SOM” or “Gordon Bunshaft,” but we never associated with this incredibly talented woman.

MCP: What years did she practice?

JCH: Natalie was born in 1921, in Patterson, New Jersey. She attended the Western College for Women in 1940, and then she received her bachelor of architecture at Columbia. She practiced at Skidmore, Owings and Merrill from 1944 to 1974. Then she went out west. But she was the senior designer, with Bunshaft, of Lever House, Union Carbide, the Pepsi World Headquarters, all of these seminal SOM projects. I didn’t realize what a major contribution she had made. And also, going back to a figure like Lily Reich—how many people really understand that she was co-designer with Mies of the Barcelona Pavilion as well as his famous chairs? So while she’s not unknown, I don’t know if the complete record of her achievements has been fully appreciated.

MCP: What’s great about the book—and one of the great advantages of these kinds of books—is that placing these women in a continuum, in context with each other, almost implies that this is a continuing effort, this unearthing. It feels like this could be an ongoing project.

JCH: Absolutely. At one point, when I was compiling the list, I shared it with Lauren Kogod, an architect and friend who’s been involved with New York City’s Storefront for Architecture. And of course, she said, “Well, what about this woman? Or how about her?” I definitely hope this becomes an ongoing project.

MCP: One of the interesting things about the book is it not only gives credit to previously unsung designers, but it also punctures some architectural myths. The old perception was that architecture was practiced by white men, almost exclusively, led by a single genius, rather than teams of people, men and women. I think that perception has changed. People largely think it’s not only incorrect, but bad form to pretend this is the way architects ever worked.

JCH: It’s true. Many of these women’s stories were buried under the weight of the dominant and more prominent male peers. Natalie du Blois is a case in point. And yet since the late 19th century, there have been women in design offices. Oftentimes they were at the drafting table, but there were very few architects, men or women, who didn’t have a coterie of designers working with them.

MCP: Who’s your ideal reader for this book?

MCP: Although it certainly wouldn’t be a bad outcome if it ended up in high school libraries so that 16-year-old girls could read it and think, “Oh, that’s a possibility.”

JCH: Absolutely. In fact, the reason that the Beverly Willis Architecture Foundation is co-publisher of the book is because their mission is to support young women in architectural careers. 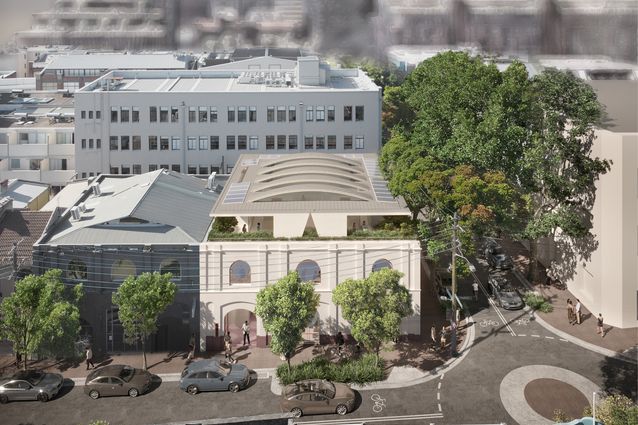