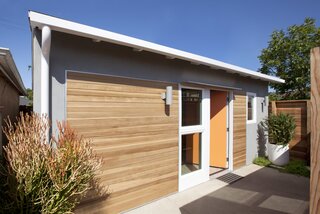 Architect Valery Augustin of DNA Architecture + Design and his wife, Kim, an art historian, had just 60 days to find another home when the owner of their beloved three-bedroom rental decided to sell. “We had this great deal on a house in West Los Angeles,” Valery says. “We were paying something ridiculous—like $2,000 per month.”

They considered trying to hold onto the home, but it wasn’t meant to be. “The asking price was so far above our max ceiling,” Valery says. “We thought, okay—we’re not going to be able to stay here.”

At first, the couple searched for other rentals—but after 20 days they changed course and set their sights on purchasing a home of their own. “The plan was to build an accessory dwelling unit, because it was a stretch for us to buy a house,” Valery explains. An ADU would help offset the mortgage cost—so he says they “scraped all the pennies together” and started touring properties.

In the end, the pair fell for a 1940s bungalow with a detached garage in their preferred neighborhood, just 15 minutes from the beach. “Ladera Heights is a diverse community located in the heart of Los Angeles,” Valery says. “The neighborhood reflects our multicultural family, and that mattered a lot to us.” Young families, nearby parks, and walkability heightened its appeal. “We put in one offer, and we got lucky,” Valery says excitedly.

Once they had keys in hand, the couple set about transforming the existing garage into the ADU of their dreams. From the start, Valery wanted abundant natural light and a fully featured kitchen outfitted with highly durable surfaces. “Stylistically, I always look at open space, natural light—the simple things,” he says. “Daylight makes any space feel larger than it is, so I try to emphasize that in the design.”

The couple also wanted to provide privacy for their family and renters. And since they were working with a tight budget, they needed to make cost-effective choices—Valery decided to serve as the project’s general contractor to help offset expenses.

After acquiring permits in June 2020, the couple kicked off the project by taking the garage down to the studs. “We just gutted it,” Valery says. The couple relied on a single framer handyman for much of the labor, although they also hired subcontractors for plumbing, electrical, tile, and cabinetry.

Once the shell was prepped, the couple opted for polished concrete floors instead of hardwood. “It seems counterintuitive, but all in all, pouring new concrete was cheaper,” Valery explains. “I liked the durability, and the ease of not worrying about a wood floor.”

Originally, the garage had a flat ceiling, but Valery chose to vault the new living space. “I thought that was an important thing to do, to make the space feel bigger,” he says. “We planned for four skylights, but ended up with just the two, which I think is plenty.” They covered the garage opening with slatted wood, save for the entry, and they cut an opening into the rear of the structure for glass sliders to connect to a private patio.

To create a sense of privacy, Valery designed a series of full-height redwood walls that lead to the ADU’s entrance. At first, the couple considered painting the front door a fresh green, but they ultimately landed on a joyful, electric orange. “I like bright, punchy colors—a lot of architects shy away from color, but I really love it,” says Valery.

Since the project is located just steps from their home, the couple observed their color options daily before making the final choice. “I painted samples on a piece of wood, and we laid out paint chips and looked at them everyday to see which ones really grew on us.”

The new ADU sits within the garage’s original footprint, and it offers renters 390 square feet of cleverly designed living space. The ceiling lowers as you enter the kitchen and bathroom spaces, to provide room for air conditioning ductwork. “It also defines that space,” Valery notes. “The unit is designed in thirds: The doors line up with the middle third, and the kitchen and bathroom are lined up under the drop ceiling.”

The couple opted for a full kitchen—and to take the space to the next level, they spent $1,975 for a panel-fronted refrigerator. “It was hard to justify, even to myself—but to me, it is about the quality of the design,” Valery explains. “You can buy a fridge for $400—and maybe that would’ve been smarter—but I wanted a clean and elegant design, so I chose panel-front appliances.”

The custom cabinets were another significant investment—they cost $9,525, and were fabricated by Rowla Studios. “They do beautiful cabinetry,” Valery says. “They’re the kind of millworkers you want to work with if you ever get the chance.”

To provide privacy, Valery avoided placing windows along the back wall. “I didn’t want to have openings into our yard,” he says, “so it made sense to load the kitchen and bathrooms on that side of the space.”

Ultimately, Valery highlights the concrete floors, and shopping thoughtfully online and at Home Depot, as the sources of his greatest cost savings. “I think sourcing and spending money in the right place is important,” he says. “I skimped in some areas so I could splurge on the kitchen.”

He also ordered materials himself, and had subcontractors install them. “If you can get the pieces yourself, you can save money,” he says. “During the pandemic, my office was in the main house, so 10, 12, or 15 times a day I’d get a knock on the door. I was constantly on-site, which made it easy for me to be available.”

“I’m not going to lie; it’s been a game-changer,” Valery says of their decision to buy a home and build a rental property. Now that it’s finished, the ADU has a 5.0 rating on Airbnb—and he’s proud that the space is being enjoyed by many guests. “We have long-term renters; people who are staying at least 3-6 months at a time,” he says. “But we have time blocked off for my in-laws, too. People really seem to respond to it, and it warms my heart.”

Valery’s favorite part of the design isn’t an element at all, but a time of day. “What I love is when I sit in the place at sunset, which isn’t too often because it’s rented pretty solidly now,” he says. “The light comes in through the private rear patio, which is is one of the best things we did—people love it.”