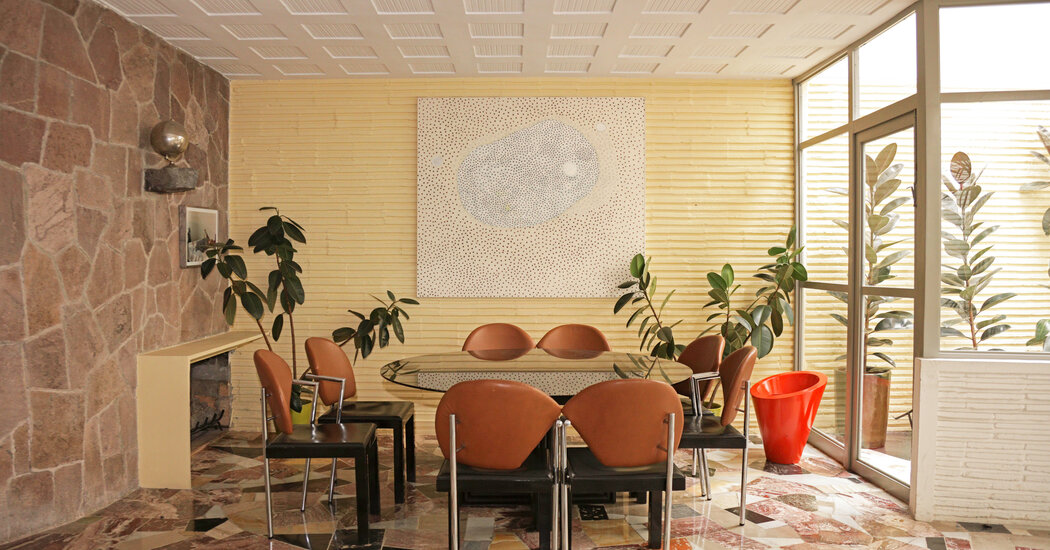 Welcome to the T List, a newsletter from the editors of T Magazine. Each week, we’re sharing things we’re eating, wearing, listening to or coveting now. Sign up here to find us in your inbox every Wednesday. And you can always reach us at [email protected].

Designed by the Mexican Modernist architect and urbanist Mario Pani as a private residence, Casa Pani — a 1960s-era, single-family home in the lively Cuauhtémoc borough of Mexico City — has recently opened as a six-bedroom guesthouse. Reimagined by the Los Angeles-based architect Miggi Hood, alongside her business partners Yola Jimenez, of Yola Mezcal, and the entrepreneur Marie Cazalaa, the property is an amalgam of the old and the new: The original three-story building, which was completed in 1962, connects to another three-story structure erected by the local architecture firm Estudio Atemporal in 2019. Guests enter through a whitewashed lounge with vaulted brick ceilings, over a dozen works by the American abstract painter James H. D. Brown and midcentury-inspired chairs upholstered in cream vinyl. The four rooms in the main house are accessible via a stucco staircase and feature details like a wooden partition by the Spanish Modernist designer Eugenio Escudero and arched wooden bed frames by the contemporary Los Angeles-based artists Ingemar Hagen-Keith and Tallulah Hood. Through a marble-tile atrium with red volcanic-rock walls, and a covered courtyard with a Valentine Schlegel-inspired dipping pool of Hood’s design, is the new building. A spiral staircase forged from steel leads from one of the additional rooms to the other, each with curved oak doors crafted by the local furniture studio Taller Nacional, along with woven stools and shag rugs by the design firm Txt.ure that recall the designs of Luis Barragán. Both buildings offer rooftop terraces, where guests can enjoy views of the magnificent stained-glass windows of the church next door. About $150 per night, casapani.com.

You may have noticed outdoor socializing’s de facto uniform: a cozy, fluffy fleece jacket fit for inclement temperatures. But Gemma Greenhill, the co-founder of the Oakland, Calif.-based shoe label Santa Venetia, was after something a little different than the ones typically offered: “You see a lot of funnel-neck fleeces with company names emblazoned on the front, but it’s not my aesthetic,” she says. “I wanted a jacket that met a comfort need and a style need.” So she stitched together a checkered fleece whose cropped yet roomy silhouette was based on that of a beloved vintage military jacket. The handmade piece fetched enough compliments that Greenhill decided to launch a new label. Grön Kulle, named for the Swedish translation of her surname (Greenhill, who is British and identifies as mixed race, only recently became aware of her Scandinavian heritage), offers eye-catching fleeces available in three styles that come with either an open or zippered front. There’s the Noor, which has a large yin-yang motif on the back; the Moonrise, whose patchwork pieces resemble a night sky; and the Lu, which has a checker print. Each style is offered in a variety of colors, including persimmon, sage and buff, and the pieces are sustainable, made to order in small batches from dead-stock fabric salvaged from rag mills in Los Angeles and New York. As Greenhill notes, the patterns are also well suited to being admired from a distance. “They’re bold enough that they look interesting from 10 feet away,” she says. From $195, gronkulle.com.

On Thursday, the Japanese artist Yuri Shimojo’s affecting show “Memento Mori” makes its U.S. debut at Praise Shadows Art Gallery, a new space in Brookline, Mass., that aims to exhibit emerging and midcareer artists, as well as mentor young artistic talent in the Boston area. For Shimojo, who splits her time between New York and Kyoto, Japan, and the gallery’s owner, Yng-Ru Chen — who cut her teeth at MoMA PS 1, the Asia Society and Sotheby’s — March 11 is heavy with meaning: It marks the 10th anniversary of Japan’s deadly Tohoku earthquake and tsunami, which together claimed nearly 16,000 lives, and which inspired this body of work. When Shimojo heard news of the disaster in 2011, she was in her studio in New York and was struck by a report describing the sakura, or cherry blossom trees, blooming amid the wreckage. To soothe her grief, she began to paint their petals. “I started to see each one as a life,” Shimojo says. The resulting work, “Sakura” (2011-13), a muted swirl of pastel pink, white and light gray, led to four others, each rendered in Japanese ink on Khadi paper and taking a circle as its form — an orb of burgundy, a spiral of forest green, an amalgam of blue dots that look almost like an iris — a gesture toward the cyclical nature of life. Those works are included in the exhibition along with a new site-specific installation, in which a single sakura petal, made from washi paper and suspended on a thread, hangs above a mound of salt and 108 glass petri dishes, each containing its own washi petal. A dazzling light projection, created by Maria Takeuchi, and contemplative soundscape, composed by Alec Fellman, accompanies the installation. “Memento Mori” is dedicated to the victims of the Tohoku disaster and of Covid-19, and is a reminder of nature’s formidable power — as well as its resilience. “Memento Mori” is on view through April 18, 313A Harvard Street, Brookline, Mass., praiseshadows.com.

Recipes From a Seasoned Restaurateur

Since opening in 2016, Mister Jiu’s has remained one of the most exciting Chinese restaurants in the United States: an ode as much to chef Brandon Jew’s Ying Ying — his paternal grandmother — as to its neighborhood, San Francisco’s Chinatown, which he and his collaborator, Tienlon Ho, call “the birthplace of Chinese-American food” in their new cookbook, “Mister Jiu’s in Chinatown,” out this week. As with the restaurant that informed these recipes and techniques, Jew’s mission is to expose people to “a little of this and little of that,” whether it’s modern or traditional, American or Chinese, inspired by the Bay Area or somewhere farther afield. The result is a beautifully photographed project that’s both faithful and innovative — there’s sourdough in the green onion pancakes, peanut butter in the hoisin sauce — as well as technical yet conversational: “Cooking is really the study of water,” the authors declare when introducing a quick recipe for fried Taiwanese eggplant. But that’s not to say this isn’t a real restaurant cookbook, and there are plenty of captivating projects — a roast duck that takes nine pages to detail and around two weeks to execute — for those who’ve bored themselves with workaday quarantine cooking (or have perhaps become more skilled in the kitchen). And if you can’t bear the sight of your knives these days, the book still makes for great reading: on cultural touchstones like lazy susans and pleated pot stickers; and on a place — and one of its leading chefs — that continues to define contemporary American cuisine.

Many jewelers find beauty in ordinary objects — smooth pebbles, delicate shells — but Régis de Saintdo perhaps more so than most. Years ago, the Parisian maker, who spent over two decades working for the designers Elizabeth Garouste and Mattia Bonetti before going out on his own, started saving veal and beef bones he’d procured from his local butcher, simply because he liked their shape. He then bleached, sanded and carved one of them, with the intention of turning it into a gift for his wife. The resulting geometric pendant, which he accented with red coral, attracted a slew of admirers who wanted one of their own. In the four years since, de Saintdo, who also designs home accessories, has expanded his repertoire to include pieces made from palm nuts (also known as vegetable ivory) and cherry wood (from an old tree at his family’s home in Burgundy), which he garnishes with pearls, coral, amber, amethyst and howlite that’s dyed to look like turquoise. De Saintdo delights in the challenges his chosen materials present: “Bone is quite thin and curvaceous, and there might be cracks or holes inside the wood,” he explains. “You can’t just do anything you want.” The resulting one-of-a-kind rings, earrings and pendants are fairly minimalist, brought to life by the color and texture of the gems that adorn them. From $100, regisdesaintdo.com.

Thank you to all those who joined us for the third installment of T Book Club last night. The event — featuring a discussion between the novelist Brit Bennett and T features director Thessaly La Force on Nella Larsen’s classic 1929 novel, “Passing,” in which two old friends, both Black women, reunite in 1920s Harlem despite the fact that one of them is living as a white person — can be watched (or rewatched) here. An essay about the book, by Bennett, who first read it in college and, years later, would write her own novel about racial passing, can be found here. The next T Book Club pick is “The Talented Mr. Ripley” by Patricia Highsmith. We hope you’ll read along, and R.S.V.P. to the virtual conversation on that novel, to be led by Edmund White and held on April 22.